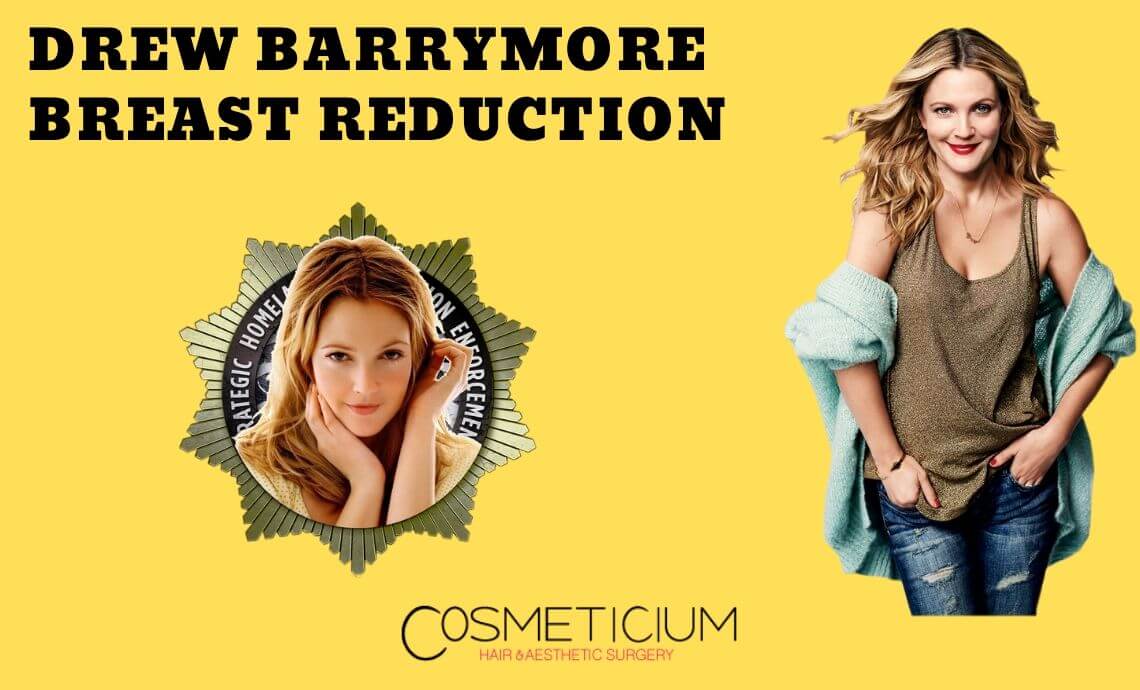 When it comes to breast aesthetics, it is usually breast enlargement procedures that come to mind. Because it is thought that women want to have bigger breasts. The fact that large breasts are considered more attractive is the most important reason for this. However, not all breast aesthetics have enlargement purposes. Some people prefer breast reduction procedures. There are also celebrities who underwent breast reduction procedures. One of those names is Drew Barrymore. The celebrity had her breasts reduced. Why did Drew Barrymore undergo breast reduction surgery? Was she satisfied with the results? How did this affect her career? All the answers can be found in our article.

Who Is Drew Barrymore?

Before we talk about Drew Barrymore’s breast reduction operation, it would be better to talk about her background. She was born as the heir to one of the Hollywood dynasties. Drew Barrymore, who was born in 1975, found herself in front of the cameras when she was only 9 months old. She acted in television commercials at the beginning of her career. When she was two years old, she starred in the series called “Suddenly Love”. When she was seven, she got a worldwide reputation for her role in the movie “E.T. The Extra Terrestrial” by Steven Spielberg, who was considered as one of Hollywood’s most important directors.

The life of Drew Barrymore, who became famous as a child, did not go very well in the ongoing process. Having alcohol and drug problems caused a sharp decline in her career. However, she recovered in a short time and managed to rise again in her career. Drew now stands out as one of the stars that remains popular today.

How Is Breast Reduction Surgery Performed?

Breast reduction surgery, which was also preferred by Drew Barrymore, enables the breast to reduce in size as the name suggests. This operation takes an average of 2-4 hours. The recovery period is 2-3 weeks. At the end of this period, patients can return to their normal lives.

There are different types of breast reduction surgeries.

Depending on the patient’s condition and expectations, the appropriate ones can be preferred. The basis of these surgeries is the removal of excess tissue and fat from the breast. After this procedure, the breast is repositioned, and the procedure is completed.

It is known this surgery leaves incision marks behind. This situation can sometimes create serious problems. However, if a doctor who is an expert in his field and a competent clinic is preferred, it can be said that the scars will be much less obvious. Because specialist doctors make an incision after making sure that the scar will be under the bra. Thus, when swimsuits and bikinis are put on, the scars are generally not visible.

You May Also Like: Breast Reduction of Scarlett Johansson

Why Did Drew Barrymore Have A Breast Reduction Surgery?

Drew Barrymore is a famous name that is always in the limelight. Because of her success, she has to lead a life in front of the press. This situation indirectly caused the famous name to have breast reduction surgery.

Drew Barrymore had breasts of remarkable size before surgery. Large-sized breasts attract people’s attention. If you are a person who is always in the limelight, it is exceedingly difficult to turn men’s attention to something else other than your breasts. In many statements she made, she complained that men were constantly looking at her breasts. This situation caused serious discomfort for Drew Barrymore.

The only reason Drew had this surgery was not because she was uncomfortable with the way men looked at her breasts. Big breasts have charm and attract attention. But there is also the capacity to pose serious health problems. Large-sized breasts are also high in weight. This can cause severe neck and back pain. In fact, precautions that are not taken in time can cause even more serious health problems.

Fill In The Form Below To Get Answers To All Your Questions About Breast Reduction From Our Doctors Within Hours. (FREE)