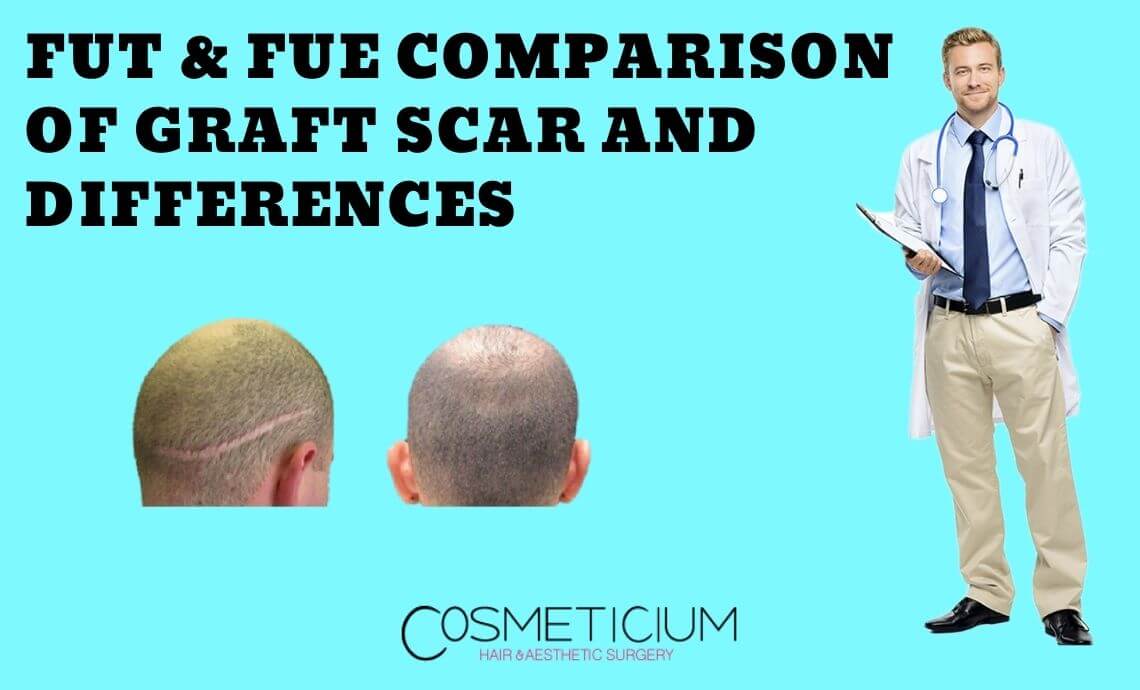 Hair transplantation can be expressed as a constantly changing and developing the health sector to better respond to people’s expectations. This situation has led to the emergence of different techniques for hair transplantation, and these have been compared over time. In our article, you will find details about the graft scar comparison between FUT and FUE, which are among these techniques.

Although hair transplantation is not similar to surgical operations in the classical sense, it should not be forgotten that this is also an operation. A different number of incisions are formed on the scalp for this procedure. Accordingly, there is a possibility of scarring. These are called graft scars. So, how much graft scarring is left in FUT and FUE techniques? Are these scars visible from the outside? Let’s get into the details now.

FUT is one of the oldest hair transplantation techniques. In this technique, grafts are taken from the donor area in the form of bands. These bands are usually thin. Depending on the number of grafts to be transplanted, its size may vary. It is a technique that allows a large number of grafts to be collected in a short time. However, after this procedure, the donor area should be stitched. The stitches are removed after 7-10 days.

The grafts taken in the form of bands are then divided into pieces and transferred to the balding area. Thus, the hair transplantation process is completed.

You May Also Like: Can FUT Hair Transplantation Method Still Be Preferred?

The FUE technique has been used intensively, especially since the early 2000s. It can be considered as a new technique. In this technique, grafts are collected from the donor area one by one. Accordingly, there are no incisions formed in the donor area. The collected grafts are taken into a special solution and meanwhile small and thin canals are opened to the balding area with a special tool known as a lateral slit. Finally, the grafts are placed in these canals and the procedure is completed. No stitches are used in any stage of the FUE technique. It is still the most preferred hair transplantation technique for the last 20 years.

In the FUT technique, a thin scalp band is taken to collect the necessary grafts from the donor area. This band is usually 1-2 cm high and 20 cm long. It is especially used in hair transplantation for patients with male pattern baldness.

In the FUE technique, grafts are collected one by one. Although this seems to be a disadvantage, it ensures that no incisions are formed on the scalp. This is a serious advantage.

You May Also Like: Differences Between DHI and FUE

There is a serious difference between the graft scars left on the scalp after the FUT and FUE techniques. It would be better to examine this one by one.

FUT is an old technique, although it is still used by some clinics. In particular, a significant incision is formed in the donor area, and then it is stitched. It is inevitable to have a scar after such a procedure. This scar in the donor area is usually visible from the outside. However, it is possible to hide the scar by keeping the hair in that area long and combing it over the scar.

In the FUE technique, incisions are also formed. However, their size is very small. It can be said that they are generally smaller than 1 mm. Therefore, when these heal, there is no scar left. The aforementioned situation is valid for both the donor area where the grafts are collected and the bald area where the transplantation is performed.

You May Also Like: How Long Does An Average Recovery Last Following FUE Hair Transplantation?