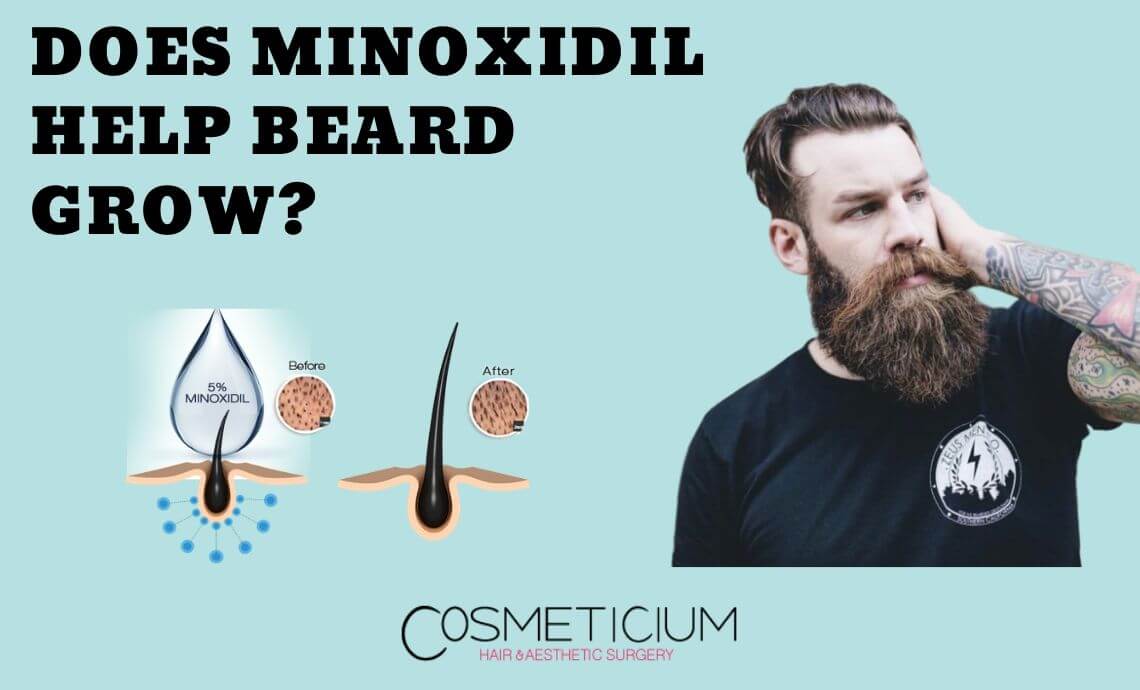 When the latest fashion trends are followed, it is seen that thicker beards are preferred in men. It is often preferred because it possible to make different styles easily thanks to the dense and bushy beard, and these are extremely impressive. Therefore, men are looking for solutions to make their beard grow more or the growing ones to be lusher. The most important option that attracts attention at this point is the drug called Minoxidil which is also used effectively in the hair transplantation process.

Does Minoxidil, which is used to make hair follicles thicker, help a beard to grow as well? All the answers are in our article.

Before giving the general characteristics of Minoxidil, it would be more accurate to mention about its history. In the 1970s, tests for drugs developed for different diseases were performed. It is found out in one of these tests that one of the side effects of Minoxidil, which was developed for the treatment of blood pressure, was excessive hair growth. From this point on, the process of development of the drug turned to be on hair extension and the studies proceeded in this direction. After many years of studies and trials, Minoxidil was approved in 1988 for men and 1991 for women.

Minoxidil is a drug that nourishes the hair follicles by stimulating the main substance of the hair thanks to its ingredients. As a result of regular use of this medicine, the volume of the hair is doubled. FDA approved this drug, which is highly effective in hair, and this has become the reason of choice for many people. All these things cause Minoxidil to be used extensively by humans.

Minoxidil nourishes hair follicles and thickens hair strands. In this way, the density of hair is seriously increased. This medication alone has the power to produce a significant change in hair strands. However, it should be noted that Minoxidil does not grow non-existing hair! It makes the existing hair more voluminous and revitalizes weak hairs for a more intense look.

When the information given so far is taken into account, it is more clearly understood how effective this drug is. Therefore, it can be said that people are quite right in asking if Minoxidil helps to grow a beard.

You May Also Like: Minoxil and Finasteride Usage After Hair Transplantation

Can Minoxidil Be Used for Beards?

The use of minoxidil for hair is extremely effective and this drug has been tested on the beard. People have used this medicine on their faces to increase their beard density. It is known that a significant number of people who use Minoxidil that feeds the hair follicles give positive feedback about the drug and denote that it enables beard growth. However, it should not be forgotten that this medicine has been developed for hair, not for beard.

It would not be wrong to say that Minoxidil has an effect on the beard and that it allows the growth and the development of the beard to a certain extent. However, it is unfortunately not possible to mention that this medicine fully meets the expectations. So it will not be wrong to say that the right choice for people with serious problems regarding their beard point is not this drug.

You May Also Like: 5 Things That Those Who Want to Have Beard Transplantation Should Know

Is Minoxidil Risky to Use in Beards?

As repeated several times above, Minoxidil is a drug developed for hair. Therefore, it is not possible to say that it is correct to use for a different purpose. As it is known, very long studies and trials have been conducted for the development of this drug. It could be introduced into the market after studying on this drug for more than 10 years. In addition, all of these trials were done for the hair and not a single one was carried out the beard.

In general, the effect of minoxidil on beards is limited. However, there is no clear information about its side effects. Therefore, it should never be used without doctor’s advice. If it is to be used on the beard, it is strictly forbidden to act without the advice of a doctor.

What is the Alternative to the use of Minoxidil?

The limited effect of Minoxidil on the beard and the risk of a number of unknown side effects make it more logical to turn to alternative solutions. Beard transplantation, which is among the alternatives in question, both meets the expectations and offers a permanent solution.