It will be more reasonable to give some information about Salman Khan before talking about his hair transplantation. Salman Khan is the son of Salim Khan who is one of India’s most famous screenwriters. Thanks to his father, he became a part of television world and gained a serious reputation here. The Indian actor started his career with the movie “Biwi Ho To Aisi”. He later appeared in numerous Bollywood productions. The successful actor still draws attention as one of the sought-after names of Bollywood.

Khan started losing his hair for the first time in 2002. The hairline of the famous name who experienced male pattern hair loss (androgenic alopecia) began to pull backwards. Then baldness occurred in some parts of his hair. This situation made Khan decide to have a second hair transplantation in 2003. 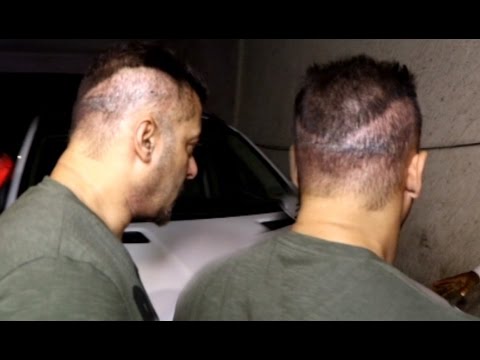 FUT technique was used in his first hair transplantation. As, hair is taken from the donor area in strips in this technique. It is then transplanted to the balding area. It is almost inevitable that scars remain on the scalp during this process. This is what Khan has experienced. There are scars on the scalp that are difficult to hide. All these had a negative impact on the celebrity’s career. Due to all the above-mentioned reasons, the Indian actor has decided to have his second hair transplantation.

You May Also Like: How Long Does an Average Recovery Last Following FUE Hair Transplantation? Synthetic hair is transplanted with a special technique. Thus, the hair strands in question gained a natural appearance. It is hard to notice whether these hair strands are synthetic or fiber.

Salman Khan has got this transaction done in several stages. It is estimated that an American doctor has carried out the hair transplantation. But there is no information about the doctor’s name.

You May Also Like: Why is Turkey the Best Place to Have a Hair Transplant?

Salman Khan: Before and After Hair Transplantation

These processes with synthetic hair strands enabled the famous name to regain his old image. It would not be wrong to say that his hair looks natural. To achieve this, the strands were transplanted at an angle. This procedure can only be performed by a qualified surgeon and at a qualified clinic. If You Need A Perfect Hair Transplantation Like Salman Khan, Check This Page.